Birth Control is an Endocrine Disruptor 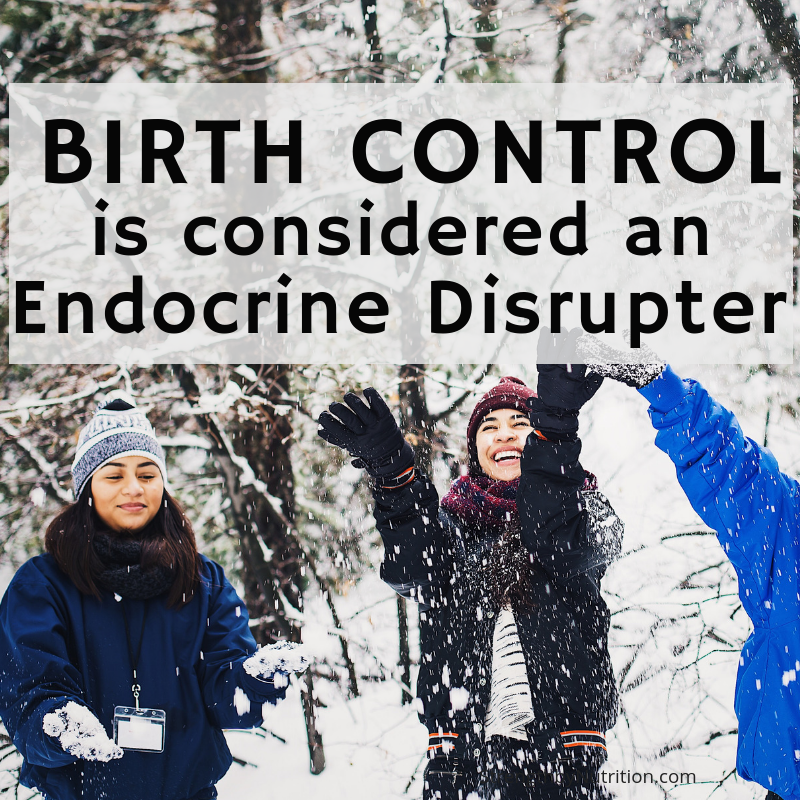 We’ve been on a roll lately, talking about cleaning up your living environment and reducing your exposure to toxicants. Everything from cosmetics to laundry detergent to fragrances. But what about the obvious elephant in the room?

Don’t let the candid photo fool you, the little Pill we pop every day or IUD we had implanted are actually considered endocrine disruptors (when using the definition set by the World Health Organization).

Makes sense, though, right? We are taking synthetic hormones to shut off our ovulation. Our ovulation is controlled by your endocrine system. Thus a synthetic compound that disrupts this intricate system is considered an endocrine disruptor.

An endocrine disruptor is defined as “chemicals that may interfere with the body’s endocrine system and produce adverse developmental, reproductive, neurological, and immune effects in both humans and wildlife” (NIH).

According to the NIH, endocrine disruptors can:

Sounds like hormonal birth control fits the bill. Other examples of chemicals that are known endocrine disruptors include diethylstilbestrol (the synthetic estrogen DES), dioxin and dioxin-like compounds, polychlorinated biphenyls (PCBs), DDT, and some other pesticides.

What About Birth Control Makes it an Endocrine Disruptor?

Ethylestradiol is an estrogenic compound. We know that an increase in estrogenic compounds increases certain cancers like breast and ovarian cancer. According to the 2012 State of the Science of Endocrine Disrupting Chemicals report, “there is good experimental evidence that estrogenic chemicals with diverse features can act together to produce substantial combination effects.”

While there is quite a bit of conflicting data and methodological issues with some of the studies, the trend is that for younger women put on birth control pills, their longer term risk of breast cancer is higher – the longer they are on the pills (and maybe, especially if they are on the OC’s longer prior to their first full term pregnancies.)

Other risks to consider are essential nutrient deficiencies caused by the pill (including folic acid, B vitamins, Vit C and E, Magnesium, Zinc, and Selenium) which can further affect liver detoxification along with thyroid and adrenal function. The thyroid and adrenals are endocrine glands and produce hormones that affect your metabolism, circadian rhythm and metabolism – not something you want to mess around with.

How about Progestins, anything wrong with those? According to a few experts, “Older generation progestins (e.g., Levonorgestrel, desogestel, gestoden, norgestimat), are as derivates of 19-nortestosterone, a common anabolic steroid (Brueggemeier, 2006), which are able to activate androgen receptors and exert androgenic actions (Sitruk-Ware, 2006; Wiegratz and Kuhl, 2006). Who wants to look and exhibit more male features? Definitely not me!

Newer progestins (e.g., dienogest, drospirenone) on the other hand, bind very specifically to the progesterone receptor and are anti-androgenic (Wiegratz and Kul, 2006).” I don’t know if I agree with this 100%. Based on my own personal experience, after getting the IUD in May 2017, I developed cystic acne on my face and body along with black stray hairs on face and belly, and gained roughly 10lbs. A DUTCH test confirmed that I had extremely high testosterone levels which were being metabolized down the 5 alpha pathway (extremely androgenic metabolic pathway). Not exactly my idea of a side-effect I am willing to endure.

So what should you do?

Not only should we be concerned about ourselves, but also the impact on the reproductive health of wildlife from the excretion of these chemicals into the aquatic environment.

Bottom line, consider our hormonal BC as a potential endocrine disruptor when paving our way to a healthier, cleaner, and safer environment. Need help cleaning up your home? Your Cosmetics? Perhaps consider doing a liver detoxification? Click the links to view our articles.

PrevPreviousWhat is Your Body Burden & How to Reduce It?
Next12 Reasons Why You Didn’t Get Your Period this MonthNext