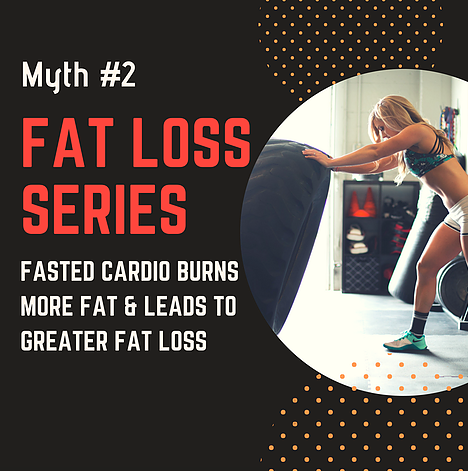 Today we continue to reveal yet another common fat loss tip you should ignore!

Training when calories burned were matched.

It doesn’t stop there. Today, you will witness yet another age-old fat loss technique unravel in the face of science.

Unfortunately, fitness myths die hard, so don’t expect this one to go anywhere soon. What you CAN expect, however, is to be ahead of the curve and know the real truth of fasted cardio and fat loss.

The reason this fat loss technique came about can be explained by a simple example. When you eat a bowl of cereal before a workout, the carbs and protein elicit an insulin response so that glucose can be taken up into the cell.

That’s all fine and dandy, except…

So to capitalize on this biochemical pathway, fitness professionals suggested that doing cardio in a fasted state (thus no insulin), would allow the fat oxidizing enzymes to burn stored body when we exercised.

Looking at the big picture, however, we lose body fat when we’re in an energy deficit. I.e. we expend more energy than we eat through diet and exercise.

Not because our fat burning enzymes have their pedal to the metal.

So, if this age-old fat loss tip is true and fasted cardio is indeed superior to fed cardio for overall fat loss, it must either:

2) enhance a greater calorie burn from fat rather than from muscle, thus creating a body recomposition effect.

If this argument were true and fasted cardio created a larger energy deficit, you could expect to burn a total of 600 calories/day where 500 calories now came from fat and 100 calories came from muscle.

Unfortunately, this is not the case.

In a study that compared the effects of fasted vs. fed exercise on 24-hour fat oxidation (Kenshiro, et. al.), the total amount of calories burned over a 24 hour period were nearly equivalent, thus a greater calorie deficit was not created.

But, does fasted cardio suppress the appetite, thus leading to a lower intake of food throughout the day?

Again, the answer is no.

In fact, a study by Deighton et. al. looked at appetite, energy intake and resting metabolic responses to a fasted vs. fed 60 min treadmill workout and found that the fed group actually had the lower appetite and thus had the lower total calorie intake for the day.

Does fasted cardio have a body recomposition effect (enhancing greater calorie burn from fat rather than muscle)?

This is the primary reason why people choose to do fasted cardio overfed.

They believe they have a fat burning advantage.

And biochemically speaking, they do! Remember the explanation of insulin suppressing fat loss? That is 100% valid.

However, what fitness professionals failed to ask was if the increased rate of fat oxidation DURING exercise led to an increased fat loss over time.

The answer is no.

Again, back to the underlying principle of fat loss: body fat is lost when an energy deficit is achieved. Not because our fat burning enzymes are ramped up during fasted cardio (Kenshiro et. al.).

Diving even deeper into the body recomposition argument…we don’t get to choose WHERE we burn our fat from – and I don’t mean from our hips vs. our belly.

For example, the more fit you are, the greater amount of fat burned for exercise will be taken from intramuscular triglyceride stores – not adipose tissue stores.

Why? Because think about how much more efficient energy-use becomes when the energy supply is stocked in the muscle cell’s pantry rather than having to wait for it to be delivered from the store.

This is yet another way the body adapts its metabolism to training.

Thus, there is no evidence that doing fasted cardio will enhance body fat loss from adipose tissue even if there is a temporary increase in fat oxidation.

So what should you do?

You are going to notice a trend here…but since there is no valid, scientific reason ‘to-do’ or ‘not-to-do’ fasted cardio to enhance fat loss…do whatever makes you happy…

If you love to get up and exercise on an empty stomach because you feel light and clear-minded, do it!

However, if you are someone who gets light-headed and fights hunger pains all throughout your workout, eat a snack before-hand.

Each method is equal in the pursuit of fat loss.

Just remember the underlying principle here: a calorie deficit is a key factor that will determine if you are losing fat or not. Concentrate on that key factor and you will see results.

…If you are doing fasted high-intensity exercise early in the morning, it will be imperative to have your pre-workout meal the night BEFORE. That way you have enough carbohydrate stored to facilitate your glycolytic training modality (another subject all on its own, but wanted to include it for completeness)**