How to Eradicate H. Pylori 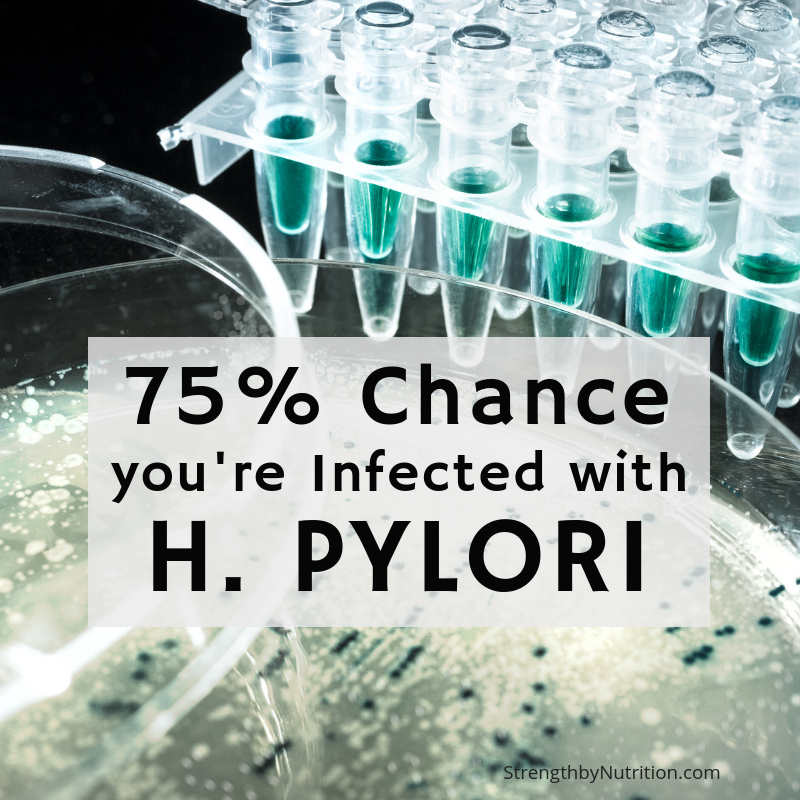 Helicobacter pylori is a hardy spiral shaped bacterium which multiplies and colonizes in the stomach. H. pylori can survive gastric acids due to its ability to produce an enzyme called urease. Urease neutralizes stomach acid, making it easy for the bacteria to survive in it own acide-free zone.

H. Pylori is the only bacterial organism that can survive in the hydrochloric acid in the stomach.

The bacteria can easily penetrate the stomach’s protective mucous lining. It can even ‘trick’ the stomach into making more stomach acid which makes the stomach lining more susceptible to damage through exposure to acid and pepsin. This can cause stomach ulcers.

2. Diarrhea, constipation, gas, bloating (due to pathogenic infections in the small and large intestines)

3. Fatigue, low energy, nutrient deficiencies (due to low stomach acid and inability to absorb iron and Vitamin B12)

5. Muscle loss and difficulty losing fat (due to chronic inflammation

8. Depression, anxiety (due to the affect of neurotransmitter production and metabolism)

10. Congestion, painful sinuses, and cold (due to implications on the immune system)

-Almost 75% of the world’s population is infected with the H. pylori bacterium. That means over 4.6 billion people are infected worldwide.

-An estimated 816 million people right now will develop a stomach ulcer caused by an infection of H. pylori

-Many patients treated with conventional antibiotic treatments find that they are still infected with H. Pylori and create another major problem – Candida Albicans overgrowth.

-Up to 65% of patients infected with H. Pylori are simultaneously infected with Candid Albicans and don’t even know it. Candida Albicans overgrowth is caused by taking antibiotics,

-Over 50% of gastric cancer patients are infected with H. Pylori.

-Research has found H.Pylori in the saliva of some infected people and can be spread by kissing. So treating multiple member in the family at once is important.

A blood test checks for the presence of H. pylori antibodies, not for the bacteria itself. However it cannot differentiate between a past infection and a current infection. H. pylori antibodies may sometimes still be present in the blood for 12 – 18 months after a successful treatment. This means that you will test positive for antibodies when you are actually negative after receiving treatment. Blood Testing is considered to be the most INCONCLUSIVE test that can be used to determine if a treatment has been successful or not.

Also known as the HPSA test. The stool antigen test checks to see if substances that trigger the immune system to fight a H. pylori infection (H. pylori antigens) are present in your feces (stool). This test is recommended BEFORE and AFTER you have been treated – it produces a very accurate result of your H. pylori status. I’ve used this test before and was very happy with the results.

How to Eradicate H. Pylori Naturally

Unfortunately, the bacterium is not easy to eradicate. There is no single antibiotic that can do the job alone, so multiple antibiotics in conjunction with proton pump inhibitors (PPI’s) such as Nexium and Prilosec, are being prescribed – which come with a laundry list of side effects.

Here are the most common conventional methods for eradication h. pylori:

Triple Theory – uses 3 different types of medication to elminate h. pyori infections. It uses 2 different types of antibiotics together (taken for 7-14 days to kill the H. pylori bacteria), along with a Proton Pump Inhibitor (PPI) that stops the production of acid in your stomach to help the antibiotic work and relieve symptoms of acid reflux and heartburn. Studies show that is it 50-80% successful.

Sequential Theory – involves taking one antibiotic for one week, followed by another for a week all while taking a PPI at the same time. One study showed a 72.6% eradication rate.

Quadruple Therapy – 3 antibiotics are taken alongside the proton pump inhibitor. Often used when the triple therapy has not been successful. This can involve taking up to 20-25 pills per day. Some studies indicate that this method is successful whereas others show less encouraging results (66.7% effective).

Unfortunately, antibiotics are becoming more and more ineffective due to the development of antibiotic-resistance. There are also many strains of h. pylori, some of which are resistant, some of which are not. In most cases, a person may be infected with a variety of strains which would make antibiotic treatment an incomplete treatment protocol.

In addition, ther are many side effects of antibiotic use to consider. Dr. Alan Gaby, M.D. states that:

Antibiotic treatment of H. pylori infection is not without risk. Antibiotic therapy can lead to the development of pseudo-membranous colitits, a potentially severe infection cause by Clostridum difficile. In addition, antibiotics frequently enable the overgrowth of Candida albicans, which can result in vaginitis, gastrointestinal disturbances, or other complaints. Moreover, antibiotic treatment could lead to the overgrowth of antibiotic-resistant strains of H. pylori, making further attempts at eradication more difficult”

It is important to look at clinically proven natural herbal solutions that can be done without any negative side-effect.

The Role of Diet

First and foremost we need to consider eating in a way that reduces inflammation both locally on the digestive tract as well systemically on the immune and endocrine system.

If we don’t remove the foods that are weakening our immune system and causing inflammation in the intestines, then we will never be able to fully eradicate H. pylori no matter how much money or time we spend on a treatment protocol.

As a general guidelines, removing gluten, diary, sugar, and food sensitives will help to bolster the immune system and heal the gut. Here are other foods to consider eliminating during your treatment protocol:

 Highly seasoned, smoked and processed meats, such as bacon, salami, some sausages, ham and many popular meat cuts

 Garlic and onion – raw or in powder form – should be limited.

Matula tea is a 100% natural product and can be taken safely with other medications. It contains clinically proven anti-bacterial, anti-fungal, and anti-parasitic properties that are proven to eradicate all strains of H. Pylori.

The primary constituents of the formulation are a combination of finely ground dried flowers, stems and leaves, taken from the following species: Oleaceae, Asteraceae, Alliaceae, Fabaceae and Myrtaceae

According to Matulatea.com, Professor Patrick JD Bouic Ph.D from the Dept. of Medical Microbiology at the University of Stellenbosch did the laboratory “in-vitro” testing for Matula Tea and measured how effective Matula Herbal Tea proved itself to be in the eradication of H. pylori (click here for the extracts of Report & Laboratory results).

The tests show that at ‘a concentration of 50% the inhibition of Helicobacter pylori bacterium is 93%.’

Meaning, the study used two identically equal portions, one portion containing Helicobacter pylori bacterium and the other exact sized portion containing Matula.  Inhibition is the amount of the bacterium that was killed off when the two portions are brought in contact with each other.

If you extrapolate the effect of drinking Matula Herbal Tea twice daily (reccomended dose) where it’s effectively killing off 93% of the Helicobacter pylori with each dose, you can imagine that after 30 days (recommended length of ‘treatment’), there would be no chance of H. Pylori survival.

Other Benefits of Matula Tea include:

• Regulates the production of stomach acids which promotes the healing of heartburn and reflux disease.

• Aids to rebuild the protective mucous lining of the stomach.

• Promotes the healing of damaged tissues.

• Non-Toxic – it is as safe as a normal cup of herbal tea.

How to Use Matula Tea

DRINK ON AN EMPTY STOMACH for best effect…  Open sachet at the top, place sachet in a cup, pour boiling water and let it draw for a few minutes, when cooled down, enjoy!  Taking Matula Tea is really easy, with a recommended dosage of just two cups of pleasant tasting tea per day for 30 days.

Other Supplements to Consider

Berberine – a herb found in barberry, goldenseal and Oregon rape that has anti-microbial properties against H. Pylori

Slippery Elm – the use of this herb helps microbial substances penetrate the mucous lining of the gut, enhancing their ability to work against bacteria and parasites

Sulforaphane – from broccoli seeds and sprouts. Has been show to have anti-h. pylori activity

Bismuth citrate – enhances the effectiveness of pharmaceuticals against h. pylori

We hope that this post brought awareness to the options available to you in your journey of eradicating H. pylori. We suggest working with a functional medicine practitioner to order labs before and after you decide to try a natural herbal remedy.

5 thoughts on “How to Eradicate H. Pylori”