Menstrual Cycles and the Moon 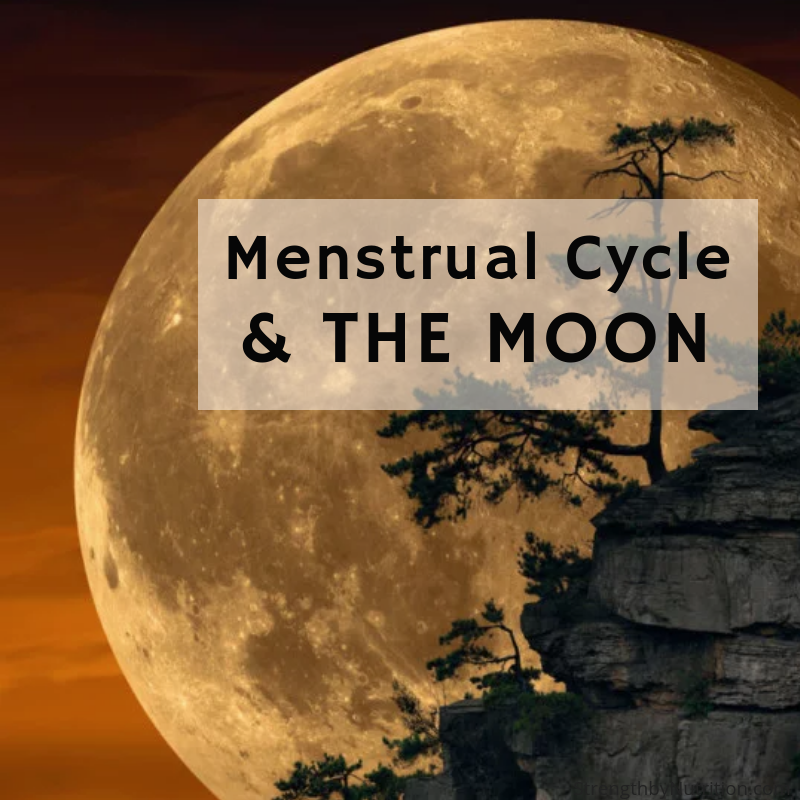 The menstrual cycle is the most basic, earthy cycle we have.
The waxing and waning, the ebb and flow of the tides, and the changes of the seasons are also reflected in the menstrual cycle of women. The monthly ripening of an egg and subsequent pregnancy (or release of menstrual blood) mirror the process of creation. In many cultures, the menstrual cycle has even been viewed as sacred.

A Sacred Cycle: The Moon and Fertility

Even in modern society, where we are cut off from the rhythms of nature, the cycle of ovulation is influenced by the moon. Studies have shown that peak rates of conception and probably ovulation appear to occur at the full moon or the day before.

During the new moon, ovulation and conception rates are decreased overall, and an increased number of women start their menstrual bleeding. Scientific research has documented that the moon rules the flow of fluids (ocean tides as well as individual body fluids) and affects the unconscious mind and dreams.1

The timing of the menstrual cycle, the fertility cycle, and labor also follows the moon-dominated tides of the ocean. Environmental cues such as light, the moon, and the tides play a documented role in regulating women’s menstrual cycles and fertility.

The menstrual cycle governs the flow not only of fluids but of information and creativity. We receive and process information differently at different times in our cycles.

The weeks following ovulation lead up to the menses; this is evaluative and reflective time, looking back upon what is created and on the negative or difficult aspects of our lives that need to be changed or adjusted. My researcher friend notes that during this part of her cycle, she prefers to do routine tasks that do not require much input from others or expansive thought on her part.

Our creative biological and psychological cycle parallels the phases of the moon; recent research has found that the immune system of the reproductive tract is cyclic as well, reaching its peak at ovulation, and then beginning to wane. From ancient times, some cultures have referred to women having their menstrual periods as being “on their moon.”

The menstrual cycle governs the flow not only of fluids but of information and creativity. We receive and process information differently at different times in our cycles.

I like to describe menstrual cycle wisdom this way: from the onset of menstruation until ovulation, we’re ripening an egg and—symbolically, at least—preparing to give birth to someone (or something) else, a role that society honors.

Many women find that they are at their peak of expression in the outer world from the onset of their menstrual cycle until ovulation. Their energy is outgoing and upbeat. They are filled with enthusiasm and new ideas as well as being quite willing to fold the towels and fulfill their perceived role of helping others.

The menstrual cycle itself mirrors how consciousness becomes matter and how thought creates reality. On the strictly physical level, during the time between menses and ovulation (known as the follicular phase) an egg grows and develops, while deep within the wall of the uterus circular collections of immune system cells, known as lymphoid aggregates, also begin to develop.4

On the expanded level of ideas and creativity, this first half of the cycle is a very good time to initiate new projects. A researcher friend of mine tells me that she has the most energy to act on ideas for new experiments during this part of her cycle.

Ovulation, which occurs at midcycle, is accompanied by an abrupt rise in the neuropeptides FSH (follicle stimulating hormone) and LH (luteinizing hormone).

But this may be offset by the simultaneous peak in testosterone production, which enhances visual-spatial ability while also increasing libido. Ovulation represents mental and emotional creativity at its peak; FSH-LH surge and subsequent rise in hormone production that accompanies ovulation may be the biological basis for this.

At midcycle, we are naturally more receptive to others and to new ideas—more “fertile.” Sexual desire also peaks for many women at midcycle, and our bodies secrete into the air pheromones that increase our sexual attractiveness to others.3 (Our male-dominated society values this very highly, and we internalize it as a “good” stage of our cycle.)

The weeks following ovulation lead up to the menses; this is evaluative and reflective time, looking back upon what is created and on the negative or difficult aspects of our lives that need to be changed or adjusted. My researcher friend notes that during this part of her cycle, she prefers to do routine tasks that do not require much input from others or expansive thought on her part.

Our creative biological and psychological cycle parallels the phases of the moon; recent research has found that the immune system of the reproductive tract is cyclic as well, reaching its peak at ovulation, and then beginning to wane. From ancient times, some cultures have referred to women having their menstrual periods as being “on their moon.”

When women live together in natural settings, their ovulations tend to occur at the time of the full moon, with menses and self-reflection at the dark of the moon. Scientific evidence suggests that biological cycles as well as dreams and emotional rhythms are keyed into the moon and tides as well as the planets.

Specifically, the moon and tides interact with the electromagnetic fields of our bodies, subsequently affecting our internal physiological processes.

The moon itself has a period when it is covered with darkness, and then slowly, beginning at the time of the new moon, it becomes visible to us again, gradually waxing to fullness.

Women, too, go through a period of darkness each month, when the life-force may seem to disappear for a while (premenstrual and menstrual phases).4 We need not be afraid or think we are sick if our energies and moods naturally ebb for a few days each month. In many parts of India, it’s perfectly acceptable for women to slow down during their periods and rest more.

I have come to see that all kinds of stress-related disease, ranging from PMS to osteoporosis, could be lessened a great deal if we simply followed our body’s wisdom once per month.

Many women, including me, have noticed that on the first day or two of our periods, we feel an urge to organize our homes or work spaces, cleaning out our closets—and our lives. Our natural biological cleansing is accompanied by a psychological cleansing as well.

If we do not become biologically pregnant at ovulation, we move into the second half of the cycle, the luteal phase—ovulation through the onset of menstruation. During this phase, we quite naturally retreat from outward activity to a more reflective mode.

During the luteal phase we turn more inward, preparing to develop or give birth to something that comes from deep within ourselves. Society is not nearly as keen on this as it is on the follicular phase. Thus we judge our premenstrual energy, emotions, and inward mood as “bad” and “unproductive.”

Luteal Phase: Seeing in the Dark

Since our culture generally appreciates only what we can understand rationally, many women tend to block at every opportunity the flow of unconscious “lunar” information that comes to them premenstrually or during their menstrual cycle. Lunar information is reflective and intuitive. It comes to us in our dreams, our emotions, and our hungers. It comes under cover of darkness.

When we routinely block the information that is coming to us in the second half of our menstrual cycles, it has no choice but to come back as PMS or menopausal madness, in the same way that our other feelings and bodily symptoms, if ignored, often result in illness.5

The luteal phase, from ovulation until the onset of menstruation, is when women are most in tune with their inner knowing and with what isn’t working in their lives.

Studies have shown that women’s dreams are more frequent and often more vivid during the premenstrual and menstrual phases of their cycles.1 Premenstrually, the “veil” between the worlds of the seen and unseen, the conscious and the unconscious, is much thinner.

We have access to parts of our often unconscious selves that are less available to us at all other times of the month. In fact, it has been shown experimentally that the right hemisphere of the brain—the part associated with intuitive knowing—becomes more active premenstrually, while the left hemisphere becomes less active.

Interestingly enough, communication between the two hemispheres may be increased as well.6 The premenstrual phase is therefore a time when we have greater access to our magic—our ability to recognize and transform the more difficult and painful areas of our lives.

Premenstrually, we are quite naturally more in tune with what is most meaningful in our lives. We’re more apt to cry—but our tears are always related to something that holds meaning for us. Years of personal and clinical experience have taught me that the painful or uncomfortable issues that arise premenstrually are always real and must be addressed.