The Connection Between Intense Exercise, Fasting, and PCOS 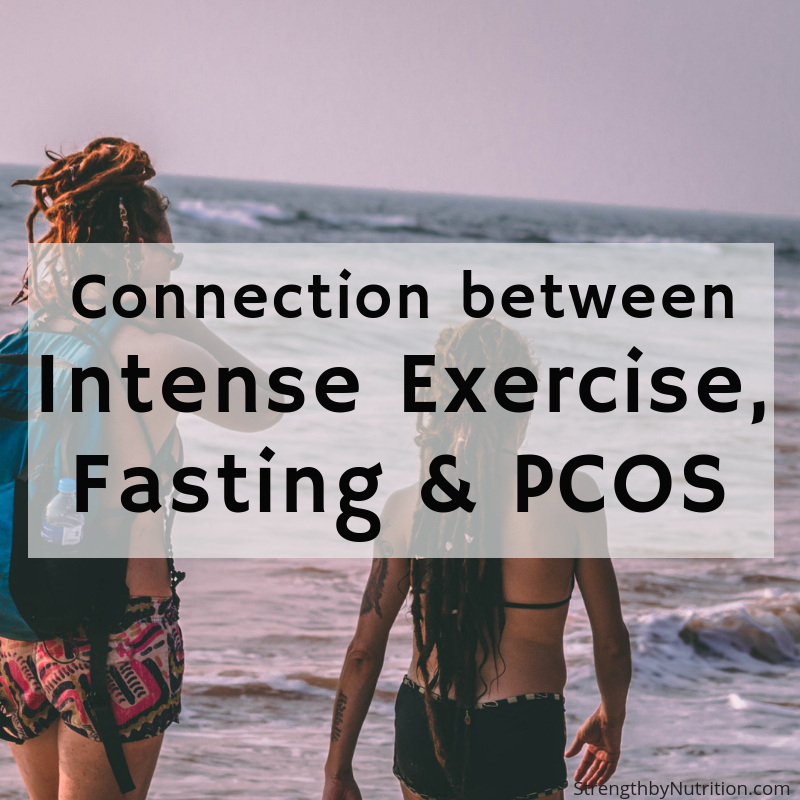 When I realized I had all the symptoms of PCOS, my mind instantly asked the question, “maybe all my muscle mass was causing high testosterone levels and thus PCOS?”

I searched high and low for evidence of this, but I couldn’t find any good science to back it up.

Effects of Post-Workout Nutrition on Hormones

During any kind of strenuous activity — whether it be endurance, HIIT, or heavy weight lifting — the body burns through its glycogen stores. Glycogen, in essence, is a form of sugar. It’s stored in the muscles. It’s one of the body’s favorite fuel sources for exercise.

The International Society of Sports Nutrition (ISSN) recommends that after a workout that depletes muscle glycogen (so after about one hour of higher intensity), you eat a meal composed of 3:1 carbohydrate:protein.

Testosterone is important for a lot of functions in the female body.

However, excess testosterone can cause infertility, PCOS, cystic acne, male pattern hair growth on the face and body, hair loss on the top of the head, and reduced libido.

Research Papers that demonstrate these effects:

Kramer, Volek et al 1998 compared the hormonal responses to consecutive days of resistance training with and without nutritional supplementation.  Subjects drank either a carbohydrate‐protein supplement 2 hours before and immediately after their workout or a placebo.  Blood was taken before and 0,15,30,45 and 60 minutes after the workout.  Lactate, growth hormone, and testosterone were significantly elevated immediately postexercise in all subjects.  Growth hormone and prolactin responses on day 1 were significantly higher for supplementing subjects, then leveled out.  After exercise, testosterone declined below resting levels for supplementing subjects during all three days.  Glucose and insulin remained stable for placebo subjects and were significantly elevated by 30 minutes during supplementation.  Insulin‐like growth factor‐I was higher during supplementation on days 2 and 3, indicating long-term increases in IGF1.

Chandler, Byrne, et al 1994 examined the effect of carbohydrate and/or protein supplements on the hormonal state of the body after weight training exercise.  Subjects consumed either a control (water), protein, carbohydrate, or carbohydrate‐protein drink immediately and 2 hours after a resistance training workout.  Blood samples were drawn before and immediately after exercise and during 8 hours of recovery.  Exercise induced elevations in lactate, glucose, testosterone, and growth hormone in all groups. Carbohydrate and carbohydrate-protein stimulating insulin levels.  Carbohydrate‐protein led to an increase in growth hormone 6 hours post exercise which was greater than protein and control.  Supplements had no effect on insulin‐like growth factor‐I but caused a significant decline in testosterone.  Testosterone levels fell below resting levels 30 minutes postexercise during all supplement treatments compared to the control.

But what about Insulin?

Back to my critical thought process, we also know that chronically high insulin levels can also cause an increase in testosterone production form the theca cells of the ovarian cells, as well as the adrenal glands. This mechanism explains the connection between insulin resistance, excessive testosterone, and PCOS in women.

As a result of insulin resistance, many body tissues will begin ignoring insulin signals (insulin resistance), your ovaries are among the few organs that will continue to remain sensitive to insulin.  This stimulation causes the ovary to produce testosterone. In women with PCOS (and the chronic insulin overstimulation that accompanies it), this can lead to drastic increases in testosterone that are seen in women with PCOS.

But does a short term increase in blood sugar and insulin from a post workout shake negatively affect the ovaries and adrenal glands in the same way that chronically over-stimulating them with coffee and doughnuts do?

Many people deliberately fast after a workout in order to burn as much fat as possible. While this is a reasonable approach for some people on occasional, women who repeatedly fast after workouts can experience significant long-term testosterone elevations. If you are a woman experiencing the negative effects of high testosterone, you may want to consider a post workout meal containing a 3:1 carbohydrate to protein portion. An example would be at least 30 grams of carbohydrate(1 large banana or a half cup of rice) and 10 grams of protein (0.5 scoop of whey protein or 1.5 oz. white meat). Fasting after a workout very occasionally is okay. And it varies by individual. Nonetheless science doesn’t lie – a fasted workout decreases muscle growth, increases soreness, and elevates testosterone levels in women.

We can’t say that a daily high intensity workout and limited fueling are the only cause of high testosterone levels. Most definitely they were not. We also have to watch our caffeine consumption along with simple sugar and carb intake at all other times of the day. Eating an appropriate amount of carbohydrates i the right form ensures we aren’t chronically elevating insulin to the point of insulin resistance and testosterone production from the ovaries.

Rarely do I recommend women to be on a low carbohydrate diet, but with sound carbohydrate  timing strategies around your workout in addition to decreasing the consumption of caffeine and simple sugars, you can decrease the amount of testosterone circulating in your body and thus may reverse some symptoms of PCOS.